This summer saw a two-week Trivia Trail in Tynemouth, giving locals the opportunity to explore the historic coastal town, the chance to win fantastic prizes from local businesses, and all raising a fantastic £340.

The money raised will directly help support refugees and asylum seekers in our community, who face barriers such as language, isolation and poverty on a daily basis.

Action Foundation Volunteer and Tynemouth resident Helen Johnson, who not only gives her time as a teacher to Action Language, as well as being heavily involved with the Covid Crisis Support effort, is an inspirational fundraiser and organised the whole thing.

Helen explained what moved her to come up with this fun event: “Every Spring I have hosted a curry event to raise funds inviting friends and family but of course this year that was impossible. What to do instead?”

“Years ago I did a treasure trail with students from school around Tynemouth. They loved doing it and that gave me the idea to do another one to raise funds for Action Foundation. I asked Katie and Abi if they thought it was a good idea and would they help with the admin. True to form they were very enthusiastic and encouraging and so I asked local businesses if they would take part by putting a clue in their window and offering a prize.” 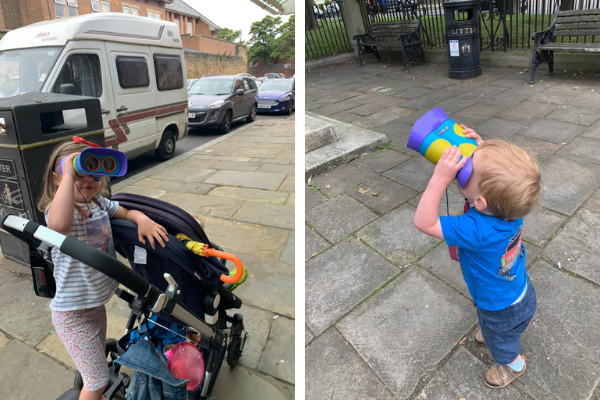 Little Ones on the look-out for clues!

“I was very touched by the positive response I received from local business owners. We were given the promise of 14 prizes. I then wrote down 20 clues and designed a route which people could follow to find them.”

“Katie and Abi added the Action Foundation logo and made the clues look eye catching. The business owners put the clues in their windows and the event was advertised on social media and local what’s app groups. It ran from the 15th-31st August.”

“There was a lot of positive feedback and people liked the idea of doing something as a family group in their local community which was entertaining and also going to help others. Social distancing was not a problem.”

“The trail raised £340 and was actually fun to create and run. Katie and Abi facilitated the smooth running of the event which was a relief to me. All in all it was a very feel-good thing to do!”

Both Communications + Events Executive Katie Bryson and Fundraising + Grants Officer Abi Walker are absolutely delighted with how successful the event turned out. Abi told us:

“Helen is one our superstar fundraisers who is always absolutely full of fantastic ideas. She reached out in July and told us she had a big idea for a fundraising event, a week later we met by Zoom and talked through her ideas to host a community-wide trail and raise money at the same time. We LOVED it.”

“Within a month Helen had rallied support from tons of local businesses and members of the community – we couldn’t believe how enthusiastic people were to take part, with lots of businesses offering to donate BIG prizes!”

“We supported her with the design work around the event and went through the clues together to make sure they weren’t too easy or difficult. It was a fantastic event and we’ve had such great responses from participants and businesses alike, it feels like it really brought the community together again after so many months of lockdown. We had so much fun on this event and would love to do something similar again soon. Watch this space!”

And the winning teams are…

Congratulations to all our worthy winners, a huge thank you goes out to Helen for organising things, all the local businesses who provided such fantastic prizes and of course the people who bought tickets. Together they helped make this event such a success despite the challenging times we’re all living through.

If YOU have an idea for a Fantastic Fundraiser, we’d absolutely love to hear from you! Just drop us a line at [email protected].