Support our CEO in his sponsored swim for refugees

Home/Fundraising, News, Uncategorised/Support our CEO in his sponsored swim for refugees
Previous Next

Support our CEO in his sponsored swim for refugees

Action Foundation Chief Executive, Duncan McAuley, plans to lead a relay team in swimming the English Channel from Dover to Calais in May to raise thousands of pounds for refugees.

At the same time, he also aims to raise awareness of the need to fight for a fairer asylum system which is more welcoming to those seeking sanctuary in the UK,  people who are often forced to make perilous journeys here packed into small boats.

“In the last five years, at least 150 refugees have died crossing the Channel with some estimates putting that number much higher.  My hope is that by taking on this challenge to swim from England to France, we can in some small way increase people’s awareness of the individual lives at stake, their hopes, ambitions, fears and memories.”

However, he stressed it was important to emphasise that the five-strong team, comprising of Duncan and university friends, Daniel Gibson and Richard Longley from Leeds; Ryan Buchanan from Southampton and Andrew Burke in Florida, were not trying to replicate the journey undertaken by desperate refugees. 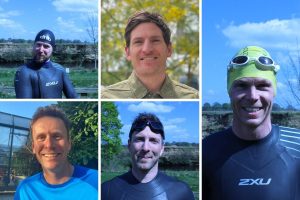 “We will be doing this with months of training, wearing wetsuits and as a relay team with a support boat looking after us,” Duncan said.

“Rather, we hope our journey across the Channel will draw the public’s attention to their journey. One which has taken them from their home countries; their loved ones, culture and history, to ours to make a new home and begin a new journey here in the UK.”

Duncan added: “Each of us will swim for an hour at a time and if we get near our target pace of two miles per hour, that will mean each person swimming two or three legs. We’re hoping we get the right weather conditions in which case it should take us between 12 and 14 hours.”

Training for the event, which is scheduled for either Wednesday 25 or Thursday 26 May depending on the conditions, has begun in earnest with Duncan swimming in the River Tees and off Saltburn beach, near to where he lives in Stockton, Cleveland, with his wife, Rachel and their two boys, Ezra and Jonah.

“It’ll be pretty cold in May with the average temperature estimated at 11.3 degrees centigrade, that’s the same temperature as a cold plunge pool,” Duncan said. “Cold acclimatisation is an important part of our training and I’ve been making sure I’m getting out of the heated swimming pool and into the cold water of the river and sea as much as possible to help my body adjust.”

Money raised by the swim will go to Action Foundation which supports refugees and asylum seekers in the North East with housing, free English teaching, digital inclusion and drop-in advice. Ten per cent of the proceeds will also go to the RNLI in recognition of their amazing work rescuing people from the Channel.