Why I’m taking on this Channel challenge – CEO Swim

Why I’m taking on this Channel challenge – CEO Swim

Action Foundation Chief Executive, Duncan McAuley, is taking on a bold challenge this May. Along with four friends, he’ll be leading a swimming relay of the English Channel from Dover to Calais with the aim of highlighting the plight of refugees forced to take this dangerous route and to raise money to help Action Foundation and the RNLI. Here, he explains more about why he decided to do the swim

Some years ago I ran a weekly football game for guys in the community which a number of asylum seekers would come along to. I still vividly remember my shock when an older man from Iran broke down during play. Football can be an emotive game, especially when adrenaline is running high, but for Mehdi it was so out of character I made a point of catching up with him afterwards.

Interspersed with sobs, I learnt that day was his wedding anniversary and the stress of not being able to see his wife of 20 years or his three teenage children for over two years had been overwhelming.

The separation had simply become too much to bear and an innocuous comment from a team mate had triggered a reaction of anger, frustration and sadness.

I tell this story to underline the often unimaginable impact of having to leave behind all that you love and hold dear. Those attempting to cross the English Channel do so at the mercy of people smugglers and at extreme personal risk. If the scenes from Ukraine have shown us anything, it’s that people arriving at our borders are often fleeing atrocities and would not be risking everything if they felt they had another choice. 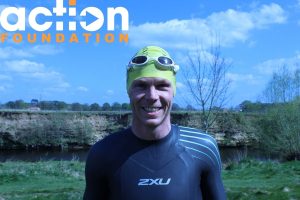 Last year 28,562 people successfully crossed the English Channel.  Almost all did so to claim asylum in the UK. This number accounts for the majority of the 48,540 total asylum applications that year, a figure which is expected to rise as Covid restrictions further ease in 2022.

They might seem like large numbers, but in reality, asylum seekers and refugees make up a fraction of our population. In fact, we are eighteenth down the list (per head of population) when compared to our European neighbours.*

The UK has historically offered a warm welcome to refugees, as can be seen by the public’s outpouring of support for people fleeing Afghanistan and Ukraine. Yet as a result of what’s become termed  ‘the hostile environment’*,  there’s been an attempt to shift the public’s attitude towards those crossing the English Channel to seek safety and security as undeserving of this same welcome.

The cruel Nationality and Borders Act*, which has just passed into law, looks set to brand anyone making this journey ‘a criminal’ upon arrival, ensuring any route to permanent settlement in the UK is ruled out. Thousands of people fleeing extreme situations of war and persecution will now find it harder to find safety in the UK and young male asylum seekers could face being shipped to Rwanda as I’ve written about here.

Seeking asylum is a fundamental human right, enshrined in the UN Refugee Convention, which defines a refugee as someone who ‘owing to a well-founded fear of being persecuted for reasons of race, religion, nationality, membership of a particular social group, or political opinion, is outside the country of his nationality, and is unable to, or, owing to such fear, is unwilling to avail himself of the protection of that country.’

Despite what you might hear, the vast majority – 72% – of people claiming asylum in the UK are accepted at the point of initial decision and a further 49% are granted legal status through the appeals process, the combination of which totals approximately 86%.

What we must not forget is that each statistic represents a person or a family. People who have fled their home country, leaving everything behind to make a sometimes lengthy and often dangerous journey to safety in the UK.

My hope is that through taking on the Swim for Refugees challenge, we can highlight the plight of those making this perilous journey and hopefully raise some funds to continue supporting those who come to seek sanctuary here in the North East.

Of course, our swim attempt across the Channel is comparable only in that it is the same body of water. Our journey in no way compares to those journeys of desperation made by people who have no other choice. I’m privileged to be in a position where I can only imagine what it would mean to leave my family, employment, culture and history to seek safety in another country, let alone the physical risk of making an unsupported crossing of the Channel.

The swim itself will take place on 25th or 26th May, weather permitting, and I have four friends who have volunteered to join me in taking on the challenge.

We’ll each swim for an hour at a time in a relay and the hope is that we’ll cross the 21-24 miles in a little over 12 hours. We’ve been training hard as it’s a sizeable task and we’ll be well supported on the day by the pilot of our safety boat who will guide us through the busy shipping lanes.

As part of our training, we’ve been acclimatising our bodies to the sea temperature to try and overcome cold shock and ensure we can swim effectively. This is unpleasant, but nothing compared to the pain and trauma experienced by those making their journey to the UK. I hope that our swim will draw attention to the much bigger issues, to the stories of those seeking safety here who are too often marginalised, demonised or at best, overlooked

Money raised by the swim will go to Action Foundation, which supports refugees and asylum seekers in the North East of England with a range of help including housing, free English teaching, digital inclusion and advice drop-ins. Ten per cent of all proceeds will also go to the RNLI In recognition of their amazing work rescuing people from the Channel.

If you would like to support our Swim for Refugees, please visit my fundraising page: https://actionfoundation.enthuse.com/cf/swim-for-refugees

3* If you would like to write to your MP opposing the new anti-refugee legislation, you can download a template letter here