Saying ‘No!’ to Hassockfield – guest blog

Saying ‘No!’ to Hassockfield – guest blog

Ahead of this Saturday’s national demonstration in Durham City Centre against the detention of women asylum seekers in Derwentside Immigration Removal Centre, Alison Stancliffe, Julie Ward and Suzanne Fletcher,  campaigners with the No to Hassockfield group, have put together this guest blog about their reasons for opposing the facility – over to Alison, Julie and Suzanne:

On Saturday 14th May Durham’s picturesque city centre will play host to more than the usual tourists, students and shoppers. Hundreds of campaigners will be there too, on Palace Green, with placards and passionate voices, all with the same message: ‘Shut Down Hassockfield!’  But what is Hassockfield and why are we saying No?

Hassockfield is the name, until very recently, of the place where the government decided to locate its newest Immigration Removal Centre (IRC), using buildings on the site of a notorious former boys’ detention centre.

Tucked away behind trees and prison fencing in the rural hinterland of Consett, County Durham, and now operating under a new name, Derwentside IRC, it’s remote from the urban communities and services that asylum seekers generally depend on, and inaccessible to the casual visitor.

It’s where right now, the Home Office is locking up vulnerable women, many of whom came to this country to seek sanctuary and build new lives free from abuse and war. Women like so many of the people supported day in day out by Action Foundation.

Our campaign group, called No to Hassockfield, is one of four campaign groups behind the Durham demonstration, all calling for closure of the IRC and an end to the hostile environment it represents. We all believe what is happening in Hassockfield/Derwentside is both inhumane and unnecessary. Over the past year, since the Home Office plans for a new women’s IRC became public knowledge, we have been fighting to stop them.

Measures in the government’s new Nationality and Borders Act aim to strengthen the UK’s ‘hostile environment’ policy in an attempt to deter anyone seeking sanctuary, making it more challenging than ever for people from all over the world to settle in this country. And yet ironically here in the North East, Action Foundation has recently completed a ground breaking project, commissioned by the Home Office itself to explore a less ‘hostile’ approach to detention policy.

Called Action Access, it tested an alternative approach to detention for women deemed not to have established a right to stay in this country, thus facing potential deportation – the very category of women intended for Derwentside IRC. Now completed, the project has provided compelling evidence that community alternatives could really work if the Home Office chose to pursue them. 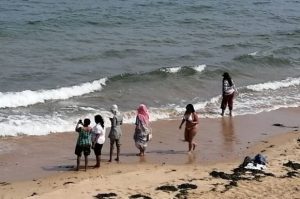 Since the end of December 2021 the IRC has sadly become reality.  At a cost of millions of pounds to the tax payer it’s been refurbished to accommodate 80 women (a far bigger capacity than has ever been needed nationally) and it is run by private contractors Mitie. It seems that as intended, the women ferried in and out since its opening are sanctuary-seekers with failed or unresolved claims, alongside women from Europe and beyond – many of them also highly vulnerable – who have been convicted of an offence and have already served a sentence of more than twelve months.

But our campaign is a reality too, calling even more urgently for the IRC’s closure and attracting support from people of all ages and backgrounds. We work both locally and nationally, engaging faith communities, trade unions, academics, students and the local arts community, and across political lines. We have explored legal challenges, gained significant press exposure and kept up a weekly presence at the gates.

Despite the Home Office decision to call the centre Derwentside, we’ve stood by the original name of Hassockfield as a reminder of the site’s disturbing history. Here’s what one of the group’s founding members, Julie Ward, said in mid 2021:

“Hassockfield Immigration Removal Centre will allow the government to effectively imprison 80 vulnerable  women at a site with an appalling history of abuse, despite genuine alternatives to detention existing that actually support the women involved, while also being more efficient and cost-effective.

Rather than seeking to extend their hostile environment policy to a small community hundreds of miles away from Westminster, the government should focus on creating an asylum system that treats people with the compassion and care that they both need and deserve. This starts with scrapping the plans for this abhorrent detention centre.”

Since Julie wrote this, both Action Foundation’s Action Access project and a second alternatives to detention scheme in Bedford have strengthened our argument that there’s no need to lock up vulnerable women seeking asylum as they try to exercise their human right to a fair hearing.  So we can say No to Hassockfield in the confidence that there are better solutions.

But we also campaign to highlight the wider injustices of detention represented by the IRC. Did you know, for example, that we are the only country in the 46 member state Council of Europe that practises indefinite detention whereby people seeking sanctuary are held for months if not years, not knowing when their nightmare will end, if they will eventually be given leave to remain or whether they will taken in the middle of the night to be deported?

That is the fate of not just the women being held in Hassockfield/Derwentside but of hundreds of other women and men detained in other IRCs.  Agnes Tanoh was one of those. Now working for our partner group Women for Refugee Women, she has spoken out tirelessly against Hassockfield/Derwentside. This is what she said at one of our regular demonstrations outside the IRC gates: 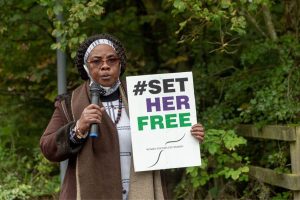 “This is personal for me. I claimed asylum here because I was being persecuted in my country and I thought I would be killed. But I was locked up at Yarl’s Wood for three months in 2012. I was put there because the solicitor who was working on my case didn’t do it properly. I suffered so much and for no reason.

“Now, the government has agreed I should stay in this country, and I have refugee status. I dedicate my time to supporting other women. I know how detention destroys a woman. Women become depressed and suicidal in detention. I don’t want to see this happen to any of my sisters who are looking for safety.”

Her experience echoes the stories of so many others who reach our shores full of hope and find instead despair. The No to Hassockfield campaign is a collective act of hope that in a remote part of County Durham at least, an injustice can be confronted and ended.

Amongst those attending the event on Saturday, which takes place between noon and 3pm on Durham’s Palace Green, will be Afghan author Gulwali Passarlay who wrote The Lightless Sky: My Journey to Safety as a Child Refugee; poet Kate Fox and Agnes Tanoh.