Home/Blog, News/Report on Action Foundation’s groundbreaking pilot project shows there is a humane alternative to detention
Previous Next

Analysis of Action Foundation’s pioneering ‘Action Access’ pilot project which was funded by the Home Office, has found it is more humane and significantly less expensive to support vulnerable asylum seekers in the community as an alternative to keeping them in detention centres.

The report which is released today (Monday 24 January) shows that:

The findings of the pilot are published by the UN Refugee Agency UNHCR, who commissioned the evaluation. Entitled, Evaluation of the Action Access Pilot, the report was researched and compiled by Britain’s largest independent social research organisation, the National Centre for Social Research (NatCen). NatCen’s report states:

“Our evaluation found qualitative evidence that participants experienced more stability and better health and wellbeing outcomes whilst being supported by Action Access in the community than they had received while in detention. Evidence from this pilot suggests that these outcomes were achievable without decreasing compliance with the immigration system.”

The findings will be discussed in a round table session on Thursday (January 27) at 10am and interested parties can book using this link.

Action Access was the very first government-funded ‘Alternatives to Detention’ (ATD) pilot in the UK. The two-year project ran between 2019 and 2021 and supported 20 women asylum seekers in a community setting in Newcastle-upon-Tyne. The majority had previously been detained in Yarl’s Wood Immigration Removal Centre, Bedfordshire. 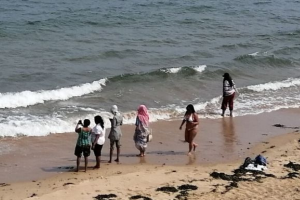 The women lived in shared accommodation, received one-to-one support from Action Foundation support staff and were supported to access legal counselling. Although it wasn’t a requirement of the pilot, the women also benefited from Action Foundation’s free English classes and our regular InterAction Drop-in.

The evaluation said this provided:

“…a more humane and less stressful environment for pilot participants to engage in the legal review and make decisions about their future, compared with immigration detention. Even when those decisions were difficult and participants had no legal case to remain in the UK, the pilot gave the participants space and time to engage with their immigration options.”

Action Foundation Chief Executive, Duncan McAuley, said the results of the evaluation demonstrated the need for a new approach to immigration detention. In November 2021 Derwentside, a new female only Immigration Removal Centre with a capacity of 80 in County Durham, opened. But Mr McAuley, said the Action Access evaluation clearly demonstrated that these women would be better served in a community setting.

“Time and time again we hear of individuals suffering in detention before being released to live in the community. In fact, 65% of those detained are subsequently released back into their community.”

Indeed, a second, ongoing ATD pilot in Bedford, delivered by King’s Arms Project, that has so far supported 75 vulnerable migrants, has found more than three quarters who received legal advice had viable options to apply to regularise their immigration status.

“While we recognise the need for some capacity in Immigration Removal Centres, it is shocking to see the Home Office investing millions of pounds in a new facility on our doorstep at Derwentside. Instead, we would love to see taxpayers’ money invested in alternatives, avoiding the huge personal cost to the individuals themselves.

“Why spend millions of pounds building and running a centre 15 miles down the road when we’ve demonstrated a cheaper, more humane alternative based in local communities?”

Costs could be halved

The evaluation of Action Access also suggests that keeping people in the community is cheaper per participant per night than holding an individual in detention.

Mr McAuley added: “Indeed, it states that the ‘potential savings offered by extending the pilot…indicate that the cost of the Action Access pilot could be less than half the cost of holding an individual in detention.”

He said Action Foundation had found the experience of working with the Home Office Community Engagement Team on the Action Access pilot ‘a really positive and productive one’ and was encouraged that the Home Office had accepted all the report’s recommendations.

“There was a genuine collaborative relationship between the Home Office, UNHCR and Action Foundation and this unique partnership demonstrates a model of working that is both dynamic and effective. Importantly, it demonstrates the success possible if the Home Office is willing to replicate this approach in the future. If they are, Action Foundation would welcome the opportunity to work in partnership again.”

“We continue to oppose the widespread use of immigration detention and are calling for alternatives to be immediately and sustainably rolled out, providing cost effective, humane solutions.”

Immigration Removal Centres (IRCs) are intended to provide ‘secure but humane’ accommodation in a relaxed regime for those who have no right to remain in the UK. However, many organisations have raised concerns about the conditions of IRCs and the treatment of detainees. A study for the 2016 Shaw Review, which led to the launch of the Action Access pilot study, found four out of every five detainee respondents met the criteria for depression.

This is what some of the women who were part of the Action Access pilot said about their experiences:

“She (support worker) helps with everything, every time I contact her, she is really nice. She always calls me to check how I am. She supports me. I am happy for this.”

“They gave me a chance. Now I feel happy and cared for. I don’t want to be dependent on other people too much, but there’s someone there to ask for help if I need it. I love sitting with the other women when we get together – it makes me feel comfortable and relaxed. My support worker is so caring and she always gives me such motherly affection.”