When the Great North 10k was cancelled in 2020, the charity-minded team at Benton Con Club Football Club wanted to find a way to give a local charity a boost. They came up with the idea of featuring a charity’s logo on their tracksuits – and we’re delighted to reveal that they’ve chosen Action Foundation!

Benton Con Club FC was created in 2017 with a handful of players, some borrowed kit and the intention of providing a good environment for some local lads to play football. Thankfully when you manage to get that feel-good environment around the club as we had hoped, you attract the kind of players who want to do more and give off the pitch as well as on it.

During our first season as a club, the support we got from friends and family members of the players was fantastic and we were able to raise enough money to fund new kits and equipment.

Charity at their heart

During that season however, with the club in a good position on the pitch, there was some bad news off it as the new born son of one our players was struck down with a mystery illness and spent months fighting for his life in the Great North Children’s hospital. Thankfully Nathan made a full recovery thanks to the incredible work of the staff.

At the end of that season we decided to use the generosity of those around us to say thank you for the care they had provided, so we planned and completed a sponsored walk from Nathan’s home in North Shields to the Great North Children’s Hospital to raise some much needed funds for the hospital.

The enthusiasm of the lads and the support from everyone around the clubs was so great we immediately decided at least once a year we will support a charity chosen by one of the players. We have since raised money for MIND mental health charity and this Christmas we have donated 100s of gifts to Cash for Kids Mission Christmas. 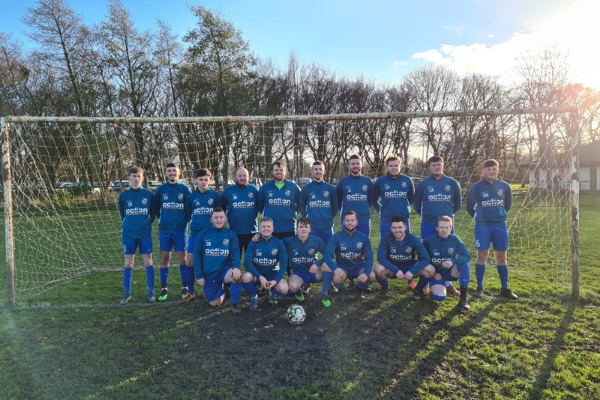 In June the whole squad was due to take part in the Great North 10K to raise money for a charity to be voted for by the players, unfortunately long before any vote took place, it was clear the run would not be going ahead. We decided as we could not effectively go out and fundraise we would find a different way to help and chose to use our new club tracksuits as a way to promote a charity by having their logo printed on the front to give them some much needed exposure.

Ross brought forward Action Foundation as an option. A lot of us involved in the club hadn’t heard of the work done by the foundation, but after reading up about the great work you guys do, we jumped at the chance to get involved and hopefully help promote the great work that you provide for the community. Going forward we are keen to continue our support for Action Foundation in more ways than just simply wearing the logo.

It’s been a tough year for everyone in the current climate and that’s no different for grassroots football. We had the 19/20 season made null and void with only 3 months of the season still to play which was a disappointment to everybody at the club as we were in a good position and looking to celebrate a successful season for the club.

We have had to spend a lot of money and time ensuring we adhere to the latest government guidelines so we can continue to provide a safe environment to play football. As everybody is aware these guidelines can change regularly and planning for anything in advance is difficult, often increasing cost and work load for clubs. Even getting delivery of the tracksuits and getting the printing work completed has proved to be a long process.

However, stringently sticking to guidelines sometimes isn’t enough, as we have already had a delayed start to the season and an enforced 5 week break, which makes not only finding a rhythm on the pitch difficult but keeping people’s morale up a difficult task too.

As much as the football club hopes to continue our success on the pitch, it has been off the pitch that has been a major focus in 2020. A football club can provide such a positive environment for a player or spectator, it’s not just winning or losing a football game, it’s physical exercise, it’s spending time around friends, it’s that one thing so many people look forward to at the end of a tough week to pick them up. A football club can make a huge difference to players’ mental health and that is the main reason we can’t wait to get back out on the pitch playing football.

Whether it’s fundraising or volunteering, if you’re interested in helping Action Foundation, please visit our Get Involved page to find out how!