Why I’m taking on the Step Up for Refugees Challenge – ex Puma pilot, James Fairman

Why I’m taking on the Step Up for Refugees Challenge – ex Puma pilot, James Fairman

On Monday we launch our Step Up for Refugees summer fundraiser – a step challenge created to show asylum seekers and refugees that they do not walk alone and that there are people willing to step up and support them. James Fairman is one of the first to take on the challenge and he’ll be walking 20,000 steps a day (you can choose however many you like) throughout August. Here, the former Action Language volunteer, tells us why he’s decided to do it. If you’d like to sponsor him you can do so here

Former RAF officer and pilot James Fairman has pledged to walk 290 miles (470km) in the month of August to raise money and awareness for Action Foundation.

James, 43, who lives in Newcastle with his wife and seven-year-old daughter, is one of the first to take on our
Step Up for Refugees Challenge which launches this coming Monday (August 1st).
James, who undertook tours of duty in Iraq and in Northern Ireland as a Puma helicopter pilot, said he’d
chosen to do the walk because it was something he felt able to do. 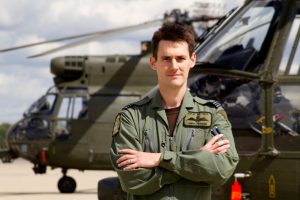 He said he realised it was nothing compared to the journey undertaken by Rowlands Gill-born Chris Ryan, the former member of the SAS and
author of ‘The One That Got Away,’ as he escaped from Iraq in 1991 after the compromise of the Bravo Two Zero patrol. Neither did it compare to the desperate journeys taken by refugees and those seeking asylum.

“To put my walk into context, Chris Ryan spent seven days and eight nights on the run, hiding and boxing around enemy positions in the freezing cold Iraqi desert. He eventually made it to the Syrian border after walking 300k with no food or water, and having been poisoned by accidentally drinking nuclear waste.

“Also walking these distances with no training or kit are persecuted civilians who’ve left their homes with their small children, no belongings, giving their only money to smugglers in the hope of getting to safety, crossing war torn cities and heavy seas, only to try and find their way to somewhere like Mansfield and live on about £160 a month from the state because they’re not allowed to work. This is less than the guideline hourly rate for an inexperienced solicitor in Newcastle.”

James’ mission for Action Foundation won’t exactly be a walk in the park however, as he is still battling mental health problems and alcohol addiction caused by the post traumatic stress disorder with which he has belatedly been diagnosed.

In 2007 James was involved in a fatal accident in which a close friend of his tragically died. It was not until 2018 – and after leaving his beloved flying career six years early – that he was diagnosed with PTSD.

Initially he saw a high ranking psychiatrist at a military hospital after turning from a placid pilot known for his mild manners (his RAF nickname was ‘Fairy Cakes’) into an angry, shouty ‘Flashman’ character with a quick temper. But they didn’t diagnose PTSD. 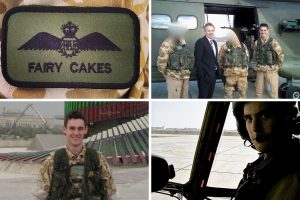 “It felt like I got a pat on the knee and a ‘there, there’” James recalls. His condition was compared to World War 2 Spitfire pilots that lost comrades in dogfights, although James believes these pilots were probably not appropriately diagnosed or treated.

“I was told these pilots would meet up every year to have a beer, shed a few tears over lost friends and then go back on their way. ‘That’s what you have,’ the doctor said. ‘That’s not PTSD, that’s just natural grieving. PTSD is when someone has seen a friend injured or killed by an IED, seen horrible wounds, and then some time later they take their kids to a birthday party and there’s a long pink balloon blowing in the wind, and that triggers their memory, and they’re right back at the scene of the trauma. That’s PTSD, and you don’t have that.'”

“So I felt: ‘Great, I don’t have that. I’m not anything like as bad as that. Fairy Cakes is fixed!'”

But James’ anger and irritability didn’t subside and he left the Forces to retrain as a lawyer, studying locally at Northumbria University Law School before qualifying at Ward Hadaway on Newcastle’s Quayside. Returning to civvy street was a difficult transition though and he was still suffering huge stress. After approaching Help for Heroes in 2018, he was referred to what is now Op COURAGE, the NHS mental health specialist service designed to help serving military personnel, reservists, veterans and their families. James was assessed by an NHS psychiatrist in Newcastle who diagnosed PTSD, and said he had probably been suffering from it for some years. 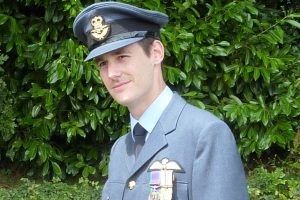 James has done a lot of reflection since leaving the RAF and some of that has inspired a real desire to help those displaced by conflict.

“I have done a huge amount of soul searching about my own contribution, and the UK’s, to Iraq, Afghanistan and numerous other countries, including those directly affected by British colonialism, and also those indirectly affected by our commercial and military might.”

“I feel strongly that British power and wealth should be used sparingly and for the good of everyone, and that considering the amount of turmoil Britain has caused internationally over the last couple of hundred years, the very least we can do as a country is provide asylum to the needy and persecuted.
“One of my main motivating factors in doing Action Foundation’s Step Up for Refugees Challenge is to try and spread awareness of the fallacy that caring for those seeking asylum and homeless veterans is mutually exclusive. We can look after both, and the disadvantaged in our society. It starts with awareness, and kindness, and Action Foundation provides both. I was hugely inspired when helping with Action Foundation’s Action Language service, helping teach English to those seeking asylum and refugees.”

James plans to share some stories on Instagram while he walks each day. “I hope to cover some information about refugee journeys and military journeys that tie in. Some will have a personal link, others will be from research,” he said.

“Please be aware, however, that the podcast is not for everyone, as it contains discussions of suicide, trauma, some very dark military humour, and language that may not even be heard in the Gallowgate End of St James Park when Sunderland are awarded a penalty in the 93rd minute!” James said.

You can sponsor James here

Join Step Up for Refugees