Our Head of Fundraising, Dave Bowditch, has just completed the first of a hat trick of epic challenges he has taken on as a farewell fundraiser before he retires from Action Foundation this autumn.

Next up at the end of August is a coast to coast cycle ride – The Way of the Roses – which starts in Morecambe and ends 170 miles later in Bridlington. It’s a scenic three-day ride which takes in the Lune Valley, Yorkshire Dales, Nidderdale and the Yorkshire Wolds and passes through the historic cities of York and Lancaster and lesser-known gems such as Settle, Pateley Bridge and Ripon.

Then just two weeks later, on September 11, Dave will take on his third Great North Run, the iconic half marathon which is returning to its original city to sea route this year, Newcastle to South Shields. Last year Dave ran the route in 1 hour 59 minutes. 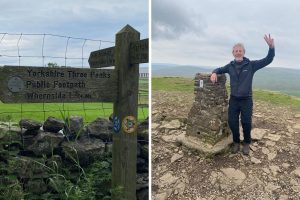 Dave at the top of Pen-y-ghent 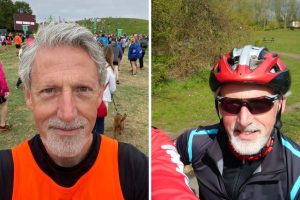 Next up, a coast to coast cycle and the GNR!

Dave said he’d really enjoyed the Yorkshire Three Peaks, although it had been a tough walk.

“Our small group of six walkers set off from Horton-in-Ribblesdale at 6.45am on a damp, misty morning and arrived back in Horton 11 hours and 52 mins later, thoroughly exhausted but exhilarated at having conquered the challenge with a few minutes to spare!

“It was great scenery although the final ascent of Pen-y-ghent was a bit of a stiff climb especially as we were ten hours into the walk by then. We did the whole walk at a fairly relentless pace with only a 15-minute break and that was to eat our lunch.”

He said he’d decided to take on three separate challenges as a result of having witnessed the ‘resilience and motivation’ of the asylum seekers and refugees he’d met during his time working for Action Foundation.

“I’ve had the privilege of working as Head of Fundraising for Action Foundation for the past five years and have seen at first hand the importance and impact of the work we do. Hearing the stories of those who have sought sanctuary here in the North East, witnessing their resilience and motivation to play a full part in enriching the life of this amazing region, and seeing how simple acts of kindness, personal support and a heartfelt welcome can create new bonds of friendship and community have been totally humbling and inspiring.

“As I looked towards my retirement this autumn, I wanted to do something to further raise awareness of this amazing organisation – its staff, volunteers, and beneficiaries – and to raise some funds as my ‘parting gift’.”

If you’d like to sponsor Dave’s amazing triple challenge, you can do so by visiting his fundraising page here