Music and singing are well known for boosting your wellbeing, so it’s been wonderful to welcome Sam and Wakanda from Citizen Songwriters to the InterAction Drop-in for a series of three songwriting workshops.

Local musician Sam Slatcher runs Citizen Songwriters, a social enterprise which grew out of a refugee volunteer project that he was part of in Durham three years ago. He goes into communities, meeting people from different backgrounds and creates a space through music where people can feel like they can come together.

Sam told us: “We’ve had three sessions with InterAction, and each one has been very different, we’ve had a real mix of people every time – there’s always been about 6-12 people. A mix of gender and backgrounds.”

“The idea was to create a safe space in the first session with ice breaker activities, sparking conversation and allowing people to share, then in week two we encouraged people to share how they feel and what it’s like to live in Newcastle. And the third session was about creating something out of that we could reflect in the music.”

“In the final session we had the most musical of all our participants – we had someone who played the guitar, someone who could play piano, so I was able to get them to play the chords which freed me up to be able to interact and try and draw out people’s experiences.” 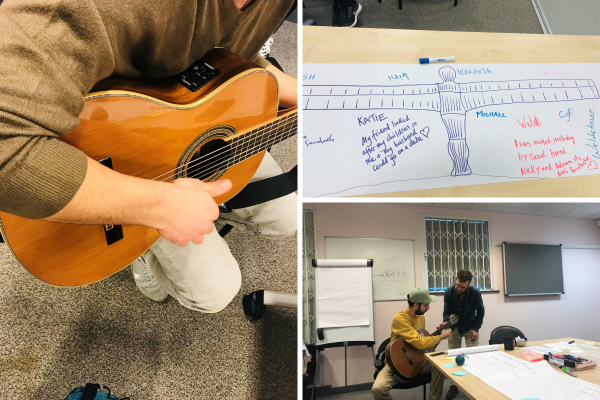 An angel in your life?

“It’s lovely because people also stay longer so they can get the chance to play the piano and guitar, and if nothing else it gives people an excuse to have a bit of fun and get access to instruments and be reminded of music from home.”

Sam said it’s important to show that there are people in the community who will listen and support the refugees and asylum seekers. Countering some of the narratives out there that people are unwelcome and unwanted when it’s actually the opposite.

This was palpable when the group were asked to share an example of when someone had showed them kindness. The Angel of the North was the inspiration – who is the angel in your life? Everyone wrote down their experiences and then Sam and Wakanda worked it all up into the lyrics of a totally original song.

In no time at all there was a simple melody and chord structure and we were all singing along to ‘An Angel in my Life’ – genuinely heart-warming stuff. Sam and Wakanda both have an infectious energy that brings the group together and the song to life all at once.

At the end there was the chance for the group to just freestyle with the instruments if they fancied a play. A Mother and her 13-year-old daughter had come along – who turned out to be a pretty confident singer and keyboard player.

InterAction volunteer Amir wowed us all with his incredible classical guitar playing and said that it was lovely to get the chance to play as he’s still waiting for his guitar to be sent over from Iran.

Then finally Eli demonstrated his awesome rapping skills – banging out lyrics about his life as a refugee in Newcastle – just incredible to see everyone feeling comfortable enough to express themselves like that.

Sam is going to keep in touch with the people who have come along to the workshops and encouraging them to join in with his Stories of Sanctuaries project which brings all the musicians from the different workshops together to share their stories.