‘I think about the students I taught who are now old enough to fight’ – Action Language teacher, Ian, reflects on his time in Ukraine

Home/Blog, News/‘I think about the students I taught who are now old enough to fight’ – Action Language teacher, Ian, reflects on his time in Ukraine
Previous Next

‘I think about the students I taught who are now old enough to fight’ – Action Language teacher, Ian, reflects on his time in Ukraine

Action Language teacher and co-ordinator, Ian Raby, began his career teaching English as an additional language out in Ukraine. As Russian forces close in on the capital Kyiv, Ian reflects on his time there and the friends he made. Details of charities supporting Ukrainians on the ground at the moment are at the end of this article

Just before I went off to university to study Russian, a flimsy book arrived from my Godmother in Wales. It was about a mining town in Ukraine named Hughesovka after its Welsh founder.

A few years later I was offered a job in a language school in Ukraine in a city called Donetsk. I went to look up Donetsk in my encyclopaedia and discovered that the two places were in fact one and the same; it was, seemingly, meant to be!

In Donetsk we were a bunch of mostly young and mostly inexperienced teachers living a long way from anywhere and with few other expats to spend time with. There were, however, a lot of local students of modern languages who wanted to meet us and show us their city, their country and their culture.

Ukraine is, by Western European standards, vast (it once took us 22 hours to return to Donetsk from Lviv, without changing trains) and the people and the land vary. The South East is heavily industrialised while in the West, the Carpathians offer very reasonable skiing trips. The Western city of Lviv looks and feels like a remnant of the Austro-Hungarian Empire while the capital Kyiv sits like Rome upon a number of hills and is filled with museums, galleries and churches.

For me, one of the most interesting places to visit was Crimea. The city of Sevastopol is a memorial to the victories and sacrifices of the Soviet era which glitters in the evening sun while the nearby Bakhchisarai with its carved wooden buildings and mini-minarets feels more like somewhere on the coast of Turkey. 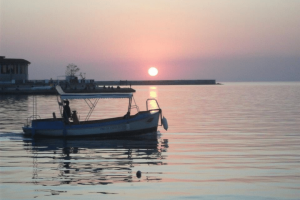 Although I had studied abroad during my degree, living and working so far away felt much more isolating, especially when we found out that most of us wouldn’t be able to go home for Christmas that year. This is by way of thanking our Ukrainian friend for not only making us feel at home but being proactive in making us go on trips and visit cultural events and historic sites when we may have been tempted, left to our own devices, to spend even more of our time drinking beer and eating dubious fish and chips in the inevitable Irish Bar.

I left Ukraine with so many unique and positive memories: sitting only a row away from the legendary Ukrainian athlete and pole vaulter, Sergey Bubka, accidentally swimming with dolphins when they came quite close to us while bathing on the Crimean coast, going back stage to meet a famous visiting conductor, getting very drunk and singing Amazing Grace with my American colleague on a long walk home.

Mostly, I left feeling positive about the future of Ukraine because the next generation – my generation – were educated and articulate and were able to find a way of reconciling the Russian and Ukrainian sides of their identity that their parents and grandparents could not.

Two years later Crimea was annexed and Donetsk was in the hands of separatists. One of my friends, who by that point was living in the EU, told me that her mother lived on one side of the line of control and worked on the other. The majority of my friends left for the Ukrainian capital, Kyiv.

Now, I wake up in the morning with a sense of dread. My friends are mostly fleeing westward. Some have chosen to fight and it makes me angry to think that the kind, intelligent and gentle men I know may need to take up arms.

I think about the students that I taught who were children when I knew them and are now also old enough to fight.

I think about the people I haven’t stayed in touch with; the student who took me metal detecting with his son, the intimidatingly handsome guy who asked, very seriously, whether he could have a slice of my apple, the beautiful and hilarious receptionist at one of our corporate clients who passed us complimentary football tickets.

I am also worried about my friends and acquaintances in Russia who are in the army or have close family members in the army or whose sons are old enough to be sent to the front should it come to that.

I am not a religious person myself so I cannot send prayers along with my thoughts but I would ask anyone who does pray to do so and to pray for peace.

How you can support Ukrainian refugees

With thanks to Smiley News for this information:

The UNHCR has set up an emergency response to crisis in Ukraine and is working with governments in neighbouring countries. By donating, “your support can help ensure that displaced Ukrainians are sheltered and safe,” they say. Donate here.

International Committee of the Red Cross

The British Red Cross is working with the Ukrainian Red Cross Society (URCS) and the International Committee of the Red Cross (ICRC) to respond to the emerging humanitarian needs. “The Red Cross has supported people affected by this conflict for years and this will not stop now,” they say. Your donation could help someone affected get shelter, warm clothes, first aid, food and water. Donate here.

UNICEF has launched an emergency appeal, requesting £46.9m to provide access to basic services including water and sanitation, immunisation and health care, schooling and learning, psychosocial support, and emergency cash assistance. The charity is repairing schools damaged by the bombings and providing an emergency response to children affected by the conflict. Donate here.

The International Rescue Committee (IRC) has launched an appeal to help support displaced families with critical aid. “We are working quickly to mobilise resources that will provide life-saving support to civilians forced to flee their homes,” the charity said. “Our teams are already on the ground in Poland, and working with our local partners in both Poland and Ukraine.” Donate here.

Based in the US, United Help Ukraine is a non-profit founded in 2014, after the annexation of Crimea. The charity is raising money to send first aid kits and humanitarian aid to Ukraine. Donate here.

Other charities you can support

In Ukraine, there are charities working locally to provide medical aid, help paramedics, as well as support for children.

United Help Ukraine is helping to provide medical aid and humanitarian relief to Ukrainians. The four focuses of the charity are medical supplies; aid; wounded warriors; and raising awareness. You can donate on its website.

Vostok SOS has partnered with Liberico, a charity in Germany, to provide evacuation support to Ukrainians attempting to flee their homes. Donate here.

Nova Ukraine is a nonprofit providing people with everything from baby food and hygiene products to clothes and household supplies. Donate on their website.

Voices of Children is a charity supporting children affected by the war in eastern Ukraine. They provide psychological and psychosocial support to children to help them overcome the consequences of armed conflict and develop. Help children by donating here.