‘Gift of Words changed my life’. Refugee, Erfan, graduates and starts job in the NHS

Home/Blog, News/‘Gift of Words changed my life’. Refugee, Erfan, graduates and starts job in the NHS
Previous Next

‘Gift of Words changed my life’. Refugee, Erfan, graduates and starts job in the NHS

When Iranian refugee, Erfan, arrived in the UK on Boxing Day three years ago, he had only a smattering of English.  Yet since joining one of our free English language classes, he hasn’t looked back. In fact, last Friday he graduated from Newcastle University with an MSc in Computer Science and has just secured a job within the NHS.

Erfan, who’s 29, says: “I would think my English is so good till I arrived in the UK and started speaking with native speakers! Then I realised I know nothing.

“I could speak in the shops and try to point out what I need, but for long conversations, or if somebody would start to talk to me randomly on the street, I had no idea what is going on. It was a bit shameful, to be honest, to not be able to speak with people and it felt like being apart. 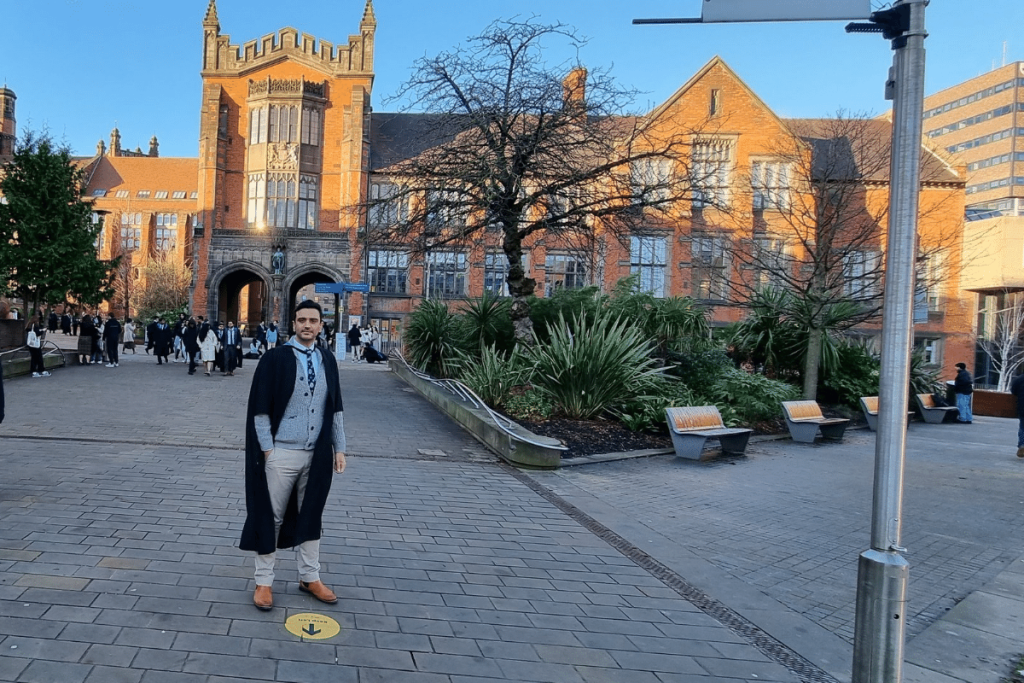 “Everything about life is more difficult when you don’t speak the general language of the country that you live in. I used to be so scared to make calls and do the things that I needed to do – from making GP appointments to everyday shopping or even socialising with people. If I want to be honest with you, after about three years it is still difficult.

“I believe language is the biggest barrier to becoming a part of a society or a culture. Everything is extremely difficult – going to a GP or finding out how systems work, handling all these things requires an understanding of the main language of the place.”

Erfan heard about Action Foundation through speaking to a fellow refugee in the city who told him about Action Language and he began taking a class, led by one of our Action Language volunteers, who give their time freely to help refugees and asylum seekers learn the language of their new country. Action Foundation also referred him to a hostel in Jesmond where he lived before getting a private flat.

Erfan recalls: “I had one of the greatest teachers in Action Foundation (Libby) and I didn’t even miss one session. We had a good group of students as well, and we made friends so quickly. Of course, I learnt a lot about the English language, but what I benefited from the most was the care and kindness I received.

“I learnt from volunteers who would spend their time and energy to just help other people and make their lives easier. I loved the environment and learnt more than just English. We made friends and there were people who were in the same situation as me and that helped me very very much.”

In September 2019, nine months after arriving in the UK, Erfan was delighted to be granted refugee status and was legally allowed to work. He got a job making sandwiches for Subway and also got on his bike as a Deliveroo and Uber Eats delivery man.

From volunteering to steady job

A year ago Action Foundation set up a new Digital Inclusion project, aimed at helping adult refugees and asylum seekers who don’t have the right technology and who are at risk of social and economic exclusion, to access the internet.

The project provides devices and data, along with training in the basic skills and competencies required to be active on-line. It also supports people in their search for work.

“During that time Jes (Balmer – who manages our Digital Inclusion project) contacted me as he met me before at Action Foundation and I attended some of his workshops for finding jobs, and he said there is a project that might be interesting to me.

“Although at that time I was so busy with my full-time study at university and working at the same time, I accepted to be a part of the project because I knew the atmosphere of Action Foundation and this opportunity was what I was looking for. I am so happy now that I did that as it was such an enjoyable experience to work in Digital Inclusion and I don’t think I would have this job now without having done it.

“I learned things like how to manage people, how to explain things to people related to IT, which I’m doing at the moment with my new job.”

Then last month Erfan received the exciting news that he’d been successful in his interview for an IT analyst role with the NHS.

“Last year was a tough year for me considering the situation caused by the pandemic. But I started my new job with the NHS and my role is basically looking after all the different pieces of software that are being used by Newcastle upon Tyne Hospitals Foundation Trust and its staff. It is challenging but I work in a wonderful team and I like my new job.

“I am so happy, really happy because not much longer than a year ago I was working as a delivery boy and I really wished from the bottom of my heart to study at Newcastle Uni. It was a big wish that came true. It changed my life and I am so happy about it so proud of myself.”