The former Lord Mayor of Newcastle, Councillor David Down and The Lady Mayoress Barbara Down visited Action Foundation this week to present the charity with a cheque for £1,350.

David and Barbara selected us as one of their two chosen charities for 2018/19 and held two fundraising afternoon teas, one in the Silver Gallery in the Civic Centre and one at Mansion House to bring people together.

The couple reflected on their time in post and chatted about the staggering 364 appointments they clocked up over the year, and said that their work involving refugees made the greatest impact on them. They’d been struck by the valuable role of the many volunteers making a difference in Newcastle, as well as how they both now feel far more connected to what’s going on locally.

Action Foundation’s CEO Julian Prior expressed his gratitude to the former mayor and mayoress. “As well as the tremendous amount of money raised, I think the awareness you’ve both raised is worth so much. There’ll be a lot more people that you will have reached through your connections and influence that we would have never had the opportunity to share our message with.” 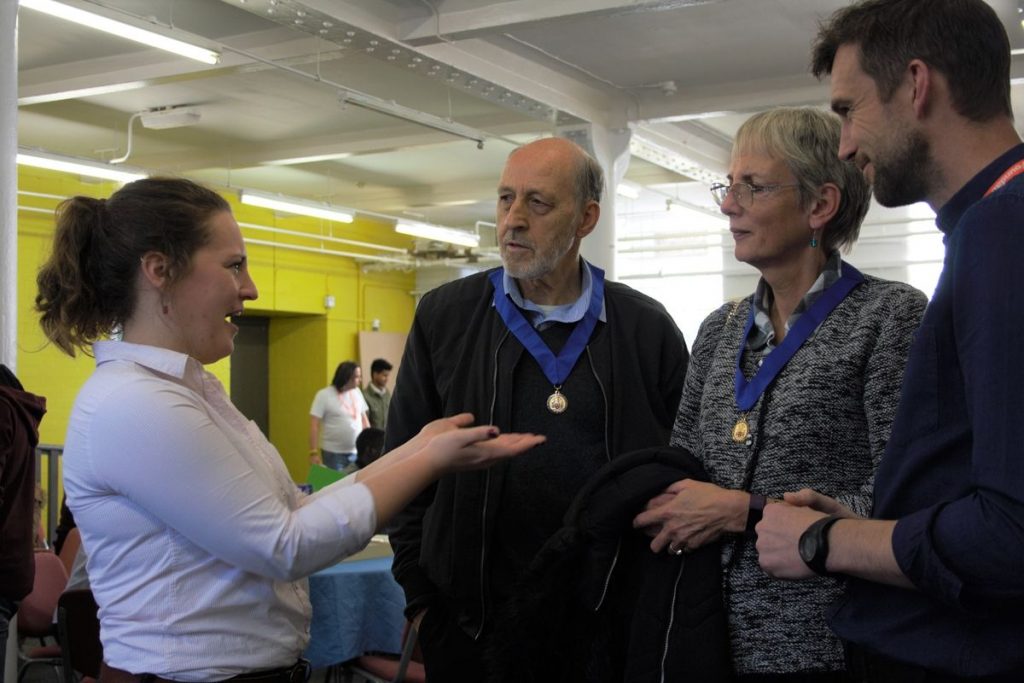 David and Barbara popped downstairs to the InterAction Drop-in to soak up the lively atmosphere and took time to chat to Drop-in Co-ordinator Kate Townsend who talked about the difference the project is making to people’s lives.

The couple also had the chance to talk to both volunteers and beneficiaries about what they get out of the drop-in – from socialising with other people who speak the same language as them, to getting linked in with local services, the benefits are clearly felt by everyone who visits.

We’d like to thank David and Barbara for their support over the last year and wish them well for the year ahead.

Find out more about how you can fundraise for Action Foundation

Our Jumbo Presentation Cheque was kindly donated to Action Foundation by discountdisplays.co.uk