Thank you to the City of Sanctuary for giving us three Golden Tickets for the European Rugby Champions Cup on 11th May! These were offered on a first-come-first-served basis and two of them went to two of our Action Language volunteers, Sheena (from Taiwan) and Maryam (from Iran), who were paying their first visit to St James’ Park! Sheena was astonished by the number of people there, and loved the marching band of soldiers wearing their bearskin hats! 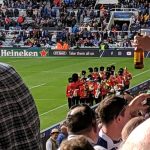 Maryam from Iran writes: How can I express my happiness? It was my first time to be in a stadium and watch a match. I’m a lady from Iran and as you know in Iran women aren’t allowed to go to a stadium to watch a game. So it was an amazing opportunity and a great chance for me to be there. Thank you many times.
On Friday 10th May, Emil from Kazakhstan, one of our Entry 2 students, had another Golden Ticket for the European Rugby Challenge Cup! It was his first time in St James’ Park too – ‘Perfect, very nice, I see Rugby first time, I very liked it. Many people, but stadium not full, maybe 70%. I took video of the fireworks and the Mexican Wave!’
Katie Bryson2019-05-28T13:43:04+01:0028th May 2019|Action Language, Blog, News, Volunteering|