Samal* came from Iraq where he’d worked as an artist, to seek asylum in the UK five years ago. He was referred into Action Foundation by the West End Refugee Service in 2017, after becoming destitute and homeless when his asylum case was refused. He was in really poor health and in desperate need of help.

*We have changed names to protect identities

Samal started his Action Foundation journey with Action Hosting, and enjoyed a successful placement living in the spare room of one our Volunteer Hosts’ homes. Here he made firm friends who he still sees regularly for dinner.

He then moved into a shared home with Action Housing and was able to get his life on his track with the vital help of his Support Worker. His health problems meant he needed extra help navigating day-to-day life with his many healthcare appointments, getting prescriptions, and attending language classes with Action Foundation.

Having this level of stability and support allowed him to branch out into the community, making friends and getting involved with volunteering work. Samal especially enjoys working with the Comfrey Project, a place where refugees and people seeking asylum across Tyneside can boost their personal well-being through allotment gardening, cooking and crafts.

Samal told his Support Worker he was feeling clearer headed and better able to concentrate in language classes. Through Action Language he has been able to take part in a greater range of activities, attending the drop in and meeting more people.

Throughout all of this he has had support from Action Foundation, liaising with solicitors past and present and remind him about appointments and ultimately enabling him to gather evidence and progress his legal case to stay in the UK.

In early February this year Samal’s Support Worker received a phone call out of the blue advising that he had been granted refugee status with five years leave to remain – a massive surprise for everyone!

His Support Worker said: “This happened very quickly – he’s been waiting for so long and he’s been through so much. His solicitors must have done a brilliant job and it’s all just come together for him. He’s been able to stay in Newcastle where he has a strong network of friends. We’re delighted.”

Being granted leave to remain in the UK isn’t the end of the story of course, and Samal will continue to be supported by Action Foundation with getting essentials sorted like a bank account, universal credit and an appointment with the Asylum Move-on team.

And how did Samal react? Well he was lost for words! But for now, he is really looking forward to getting a place of his own after so long sharing a house with other people.

We wish him all the best establishing his life going forward.

Become a Host for Action Hosting!

If you’re interested in helping someone like Samal get back on track with their life and have a spare room in your home, why not come along to our next set of Action Hosting information sessions in Sunderland – book your free place on Eventbrite or get in touch with us [email protected]. 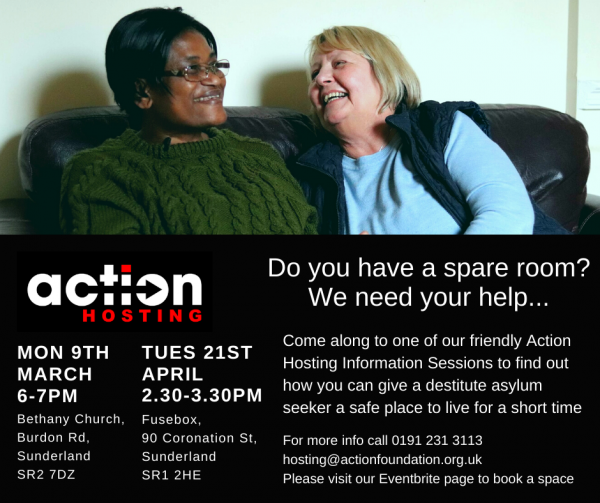