Just the Ticket campaign – first tickets go out to refugees

Just the Ticket campaign – first tickets go out to refugees

We are so grateful to everyone who supported the Newcastle City of Sanctuary ‘Just the Ticket’ crowdfunder earlier this year. As the first tickets are distributed by Action Foundation staff and volunteers, here’s an update of how the roll-out is progressing.

Hundreds of refugees and asylum seekers isolated in hotels are receiving free bus tickets and Metro passes thanks to the success of Newcastle City of Sanctuary’s Just the Ticket campaign.

The crowdfunding campaign, which ran in April, raised more than £10,000 thanks to the generosity of individual supporters and match funding from the National Emergencies Trust.

And in the past few weeks Action Foundation staff and volunteers have been going into hotels around Newcastle where asylum seekers are housed to begin distributing the travel tickets.

To date more than 400 expressions of interest from adults and children in four different hotels have been received and just over 200 people have already received their free tickets.

Of 343 people who answered a questionnaire about how they’d be using their tickets, the vast majority – 47 per cent said it was so that they could study. 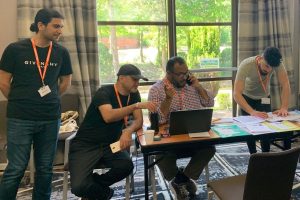 Staff and volunteers at the ticket ‘kiosk’

To visit friends – 29 per cent

To get professional help – 20 per cent

More than 500 people seeking asylum are housed in ‘temporary’ accommodation across Newcastle and one hotel is a 90-minute walk into Newcastle City Centre. Asylum seekers in initial accommodation receive just £8.24 per week to cover clothes, non-prescription medication and travel and they’re not eligible for mainstream benefits so this campaign was aimed at helping people get out and about. Action Foundation contributed to a report by national campaign group Asylum Matters about the problems of initial accommodation earlier this year which highlighted the issue of isolation for many people in hotels.

“The beneficiaries have overall been so friendly, courteous, polite and thankful that people have come together to donate the money for these tickets.”

“For many of them it is a six mile walk into town to be able to get to our InterAction Drop-in, or to see their solicitor and access other support. We have seen predominantly single men, but one of the hotels we visit is for females and families.

“Meeting babies and young kids has shown me a different perspective. This week we had an excellent English speaking 12-year-old girl, who came to help another Arabic speaking woman and her young child to access the tickets. The support that residents give each other in these hotels is obvious and great to see considering the difficult situations asylum seekers face.”

Lesley added: “It’s been really interesting doing outreach work and seeing clients where they live, it has really opened my eyes. On the one hand, it is great to be able to give something positive to people who have very little, on the other, two or three Day Rider tickets in the grand scheme of things is so very little.”

Staff have been helped with the distribution of tickets by InterAction volunteers with lived experience, which has been a real support for staff – for example with foreign language skills.

Lesley said: “Myself and Fouad (fellow InterAction Project Officer), have been well supported by six of our InterAction Drop-in volunteers, who are all also asylum seekers themselves, most of them actually still living in this accommodation. They have been fantastic, giving up their own time, helping with translating material so that we can give clients information in their own language; helping with interpreting while giving out the tickets, ensuring the smooth running whilst we are in the hotels and generally being their supportive and lovely selves.

“Another benefit has been building better connections with the resident support workers from Mears at the hotels, with both parties getting a better understanding of each other’s roles and services.”

InterAction Project Manager, Yvonne Cheung, said the collaboration on the Just the Ticket campaign across the refugee charity sector in Newcastle, under the umbrella of Newcastle City of Sanctuary, boded well for future joint projects.

“Thanks to Newcastle City of Sanctuary for bringing every charity, statutory body and the public together. Without any single one of us, it would be challenging to achieve the objective for our community. We are building a stronger community which is what we need for any good work for good causes. I hope this momentum can be continued to deliver bigger impact.”

Tickets will continue to be distributed until September when the project will end.