Home/Blog, News/Fouad: ‘My family arrived just before lockdown…’
Previous Next

Refugee Week 15-21 June  is a celebration of  the contributions, creativity and resilience of refugees – something that is more than evident in this moving story we’d like to share.

Human Rights student Fouad fled to the UK from Kuwait in September 2018. After a two-year journey through the immigration system he was finally able to bring his wife and two young sons over to live with him in the North East. It’s not a simple situation though, as not only does his eldest son have a life-threating medical condition which requires regular specialist treatment, but Fouad himself was also recovering from a serious accident.

When Fouad arrived at Heathrow Airport he immediately claimed asylum and was held in a detention centre for four days and was then taken to Derby where he stayed in a hostel for two months.

“I arrived in the middle of the night and there was no food. I lived in a small room with six people and I was not allowed to go outside. I couldn’t speak English. It was a really uncomfortable experience.”

Racism in the street

“The Home Office then moved me to Sunderland and I lived there until May 2019 when I was finally granted refugee status and the right to remain in the UK.”

“The locals in Sunderland weren’t very welcoming to refugees and we faced racism in the street.
Since I was a teenager I’ve always worked, you must work every day except Friday. So it’s hard for me not to be working – that’s why I volunteered to keep myself busy.”

“I wanted to keep my mind busy so I found Action Foundation. First I went as a student to study English, but when I started they noted my English level was a bit higher so I helped out and translated for people in the class. I also helped out at FODI and a Charity supporting disabled refugees and asylum seekers.”

Everything led me to Newcastle

“I went to college in Sunderland where I did an interpretation course – my tutors said I was good. I finished two ESOL courses in one term.”

“After that I moved to Newcastle because I was looking for a place that was good for my family – and had a good hospital. My six-year-old son Khaled has Sickle Cell Anaemia and needs blood transfusions every three weeks. “

“I did my research and everything led me to Newcastle. It’s really diverse and has the Great North Children’s Hospital. Everything was going well. I completed my ESOL level 1 and Functional Skills course in Maths and English.”

But things took a bad turn for Fouad in January 2020.

“I had an accident on the bus and that affected my knees and I needed crutches to walk until March. I’ve also suffered with severe depression and exhaustion since then too – it’s really affected my mental health. It’s also affected my speech and I sometimes lose my words.”

“I had just moved to Byker and I wanted to prepare the house for my family arriving, but just a few days later I had my accident. I had no furniture or electricity for 5-6 days, but then Rob and Kate from Action Foundation came to help me, along with other people NERS.”

Fouad’s wife and sons arrived in the UK in February, but it wasn’t quite the reunion they’d anticipated.

“My wife she didn’t know about my accident – she saw me in the airport on my crutches. After two years of not being together – it was emotional moment.”

“I didn’t get support for my mental health because of the lockdown and this has been very hard… I tried to explain to my wife why I became like this – why I am affected.”

With his family’s arrival there was a lot for Fouad to sort out, but as he was limited with his mobility this was really challenging. He needed to register them with school, GP, benefits – and often you have to go there in person which was tricky for him.

He was told he needed to wait for the hospital to give him an appointment for his son, so he went to hospital to speak to the nurses and explain the severity of the situation.

“Before my son flew from Kuwait he’d had a blood transfusion. But the flight affected him so he needed a transfusion immediately, so we needed to act fast.”

“One nurse gave me the doctor’s name and wrote a letter to the GP – who helped get things moving urgently. We saw the team at the hospital and they were very very good.”

So in February and March Fouad and his family were all living in a one bedroomed flat – he couldn’t walk or go outside with them – his wife didn’t speak English and was scared of going out alone.

And as if that wasn’t enough to contend with, the Coronavirus came and made things even more challenging for them.

“The doctors at the hospital told us to shield as my son is vulnerable, and I’m diabetic so vulnerable too. Imagine, my family has been here for months and not seen any of Newcastle.”

“Three or four weeks ago, Khaled had a problem with his mouth and we took him to the hospital and the dentist decided to remove 12 baby teeth – they would normally take one out every three weeks but they can’t do it because he’s too vulnerable because of the coronavirus situation and they didn’t want him to bleed coz of his condition.”

“It was also decided that my son needed further surgery to remove his spleen, but they knew that he wouldn’t be able to recover in the small flat where we were living. The hospital helped me so much. The doctors wrote to the council to explain the situation and after just three days we got emergency housing! This time we have a two-bedroom place in a nicer area.”

“I came to see the house and it was clear we needed flooring and the walls needed painting. We had no furniture either. I didn’t know what I would do as I was still on crutches. My friends Rob and Amir from City Church came and helped, as did Kate from Action Foundation and Jenny from the Council. I was really worried about how I was going to do it so this was amazing.” 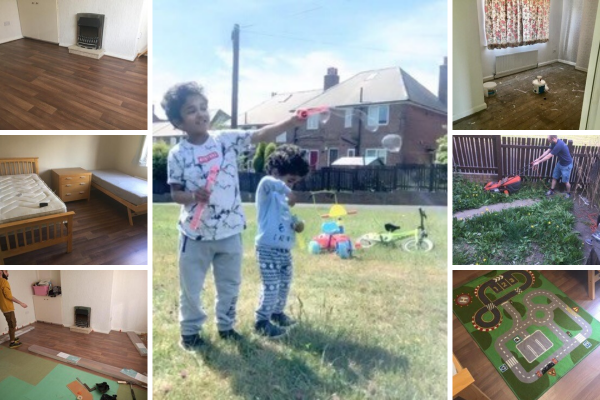 “Rob and Amir came to my house – they did a great job – I’m speechless about what they did for me and my family. They did two days of painting, and then spent another four days putting in the laminate flooring. Nicky organised all of the furniture through City Church and got it delivered to the house.“

“When they told City Church our story a little boy called Noah donated his own pocket money – £10 so my boys can buy some toys. We also got some help from friends to buy a TV – the boys had been so bored, so that’s changed the routine a bit. “

“It’s not just the things we’ve been given, it’s how supported we have been as a family.”

“My wife loves the new house and feels safer. She takes the boys to the garden behind the house and now she’s more confident. Everything’s finally settling down and I’m focussing on my hopes for the future even though my mental health situation is holding me back.”

“I studied Human Rights in Kuwait, so I want to finish my studies and find a job helping people. I want to focus on my boys and support my wife to study and be independent in the UK.”

“I would like to thank everyone who helped us, you brought happiness to our house, thank you all.”

Fouad’s determination to give his family a better life despite all the hardships he has faced is both humbling and inspiring. We wish them all a more settled time as they start their new life together as a family in the North East.