‘Action Language has been a massive life saver’

Home/Blog, News/‘Action Language has been a massive life saver’
Previous Next

‘Action Language has been a massive life saver’

It’s Volunteers’ Week 1st – 7th June, so we’re celebrating our incredible team of volunteers by sharing blog posts that give you a real sense of just how fantastic they are!

Paula started volunteering with Action Language as a teaching assistant just over two years ago at a turning point in her life. Before the Covid-19 Lockdown came into force, she chatted to us about how a mental health crisis and a passion for empowering vulnerable people got her through the doors of Action Foundation and helped her get back to herself again. 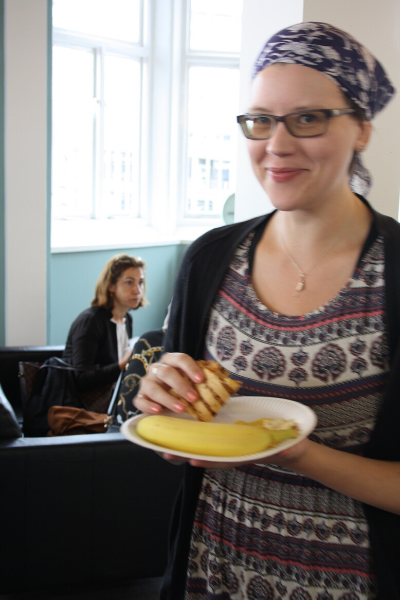 Why did you start volunteering with Action Language?

For a long time I’d been really worried about the refugee crisis and feeling really helpless that there was nothing I could do. I heard about Action Foundation through The Green Party, and volunteering sounded like a lovely opportunity. It’s really empowering helping people get access to the language they need. Not just for their day to day living but for understanding their Home Office papers, conversations with lawyers, all sorts of stuff. Also enabling them to tell their stories.

How did you get started?

I began as a teaching assistant with Entry Level Three classes, which I did for about 18 months.
Entry Level Three can be one of the trickiest places to be as a learner because you’re doing really well with the language, on the cusp of being fluent in fact, but that means a whole lot of hard things are coming and it gets really tough.

Assisting in those classes makes me realise English is a Frankenstein’s monster of a language – it’s awful! It’s fascinating seeing it from the perspective of language learners. Figuring out how to explain something that’s innate to me. Nobody taught me the rules, I just know the right way to say it.

Did you have a background in teaching?

I had been a lecturer at universities before, so initially I had wanted to keep a hand in by being in a classroom situation. I became very ill three years ago and ended up quitting my job and had been in recovery for a long time. It’s only recently that I’ve felt like part of the human race, like me again. I feel like I’ve really turned a corner and I might not have been this articulate a few months ago.

It sounds like you had a really tough time?

I’d been in academia for quite a while. I lived all over the UK doing temporary contracts, here there and everywhere at different institutions and was really struggling to break into a job that lasted more than 11 months. Settling somewhere, making friends and then suddenly you have to go somewhere else, always with this fear of ‘am I going to be homeless’.

I was about to give up and try something else when I was offered a permanent job, but at a place that I really didn’t like. I took it because I thought I had to, it felt like my last chance. It was the worst decision of my life. It ran me into the ground and I encountered toxic bullying from senior colleagues.

The stress just got too much. I had the mental health equivalent of being in a massive car accident, it all just obliterated me. I wanted to not wake up in the morning, I wanted the pain to stop.

I had to go to A+E one day because I couldn’t breathe and I thought my heart was going to explode. They did all the tests on me and the doctor said physically I was fine and that the only thing it could be was stress. The NHS staff were amazing and saved my life that day because they listened to me and believed me.

That was three years ago. I quit my job and moved to Newcastle to be with my partner and get better. It was leave or die. It’s taken me a good two and half years just to get well.

How did volunteering help you?

It has really encouraged me to do my own language learning as well, which has also given me empathy for the people I’m helping, as you understand just how hard it is. For every word I’ve lost in English, I’ve picked ones up in other languages!

It’s been so welcoming here. Having been in a workplace where I’ve been horrendously undervalued I have never felt more valued, and I’m a volunteer here. I don’t get paid to do what I do, but I’m made to feel really important every time I come here and that means so much and has done wonders to my own confidence.

A few months ago the team were looking for volunteers to do weekly enrolments, so I decided to step up. I still help occasionally in the classrooms if they’re really up against it, but I really get a kick out of the enrolment because you get to see all the levels and all the nuances. You meet so many people from so many different backgrounds, I really love it.

What are your hopes for the future?

I’m still figuring that out really. I’ve never stopped working though, I can’t be idle. I still write and do research, I make a culture and arts podcast.

I’m also writing a book – a fun and quirky look at a Damian Hirst exhibition. It’s taken me on an odyssey of discovery in many different areas from marine biology and archaeology, ancient history of all the ancient worlds, mythologies and learning huge amounts about how sculptures are made then and now.

I’d like to apply for some part-time admin jobs. It’s frustrating though because my PHd puts people off for entry level jobs, despite me really wanting to do it. I’m basically trying to reinvent myself!

Action Foundation would not be able to function in the way that it does without the incredible input of volunteers like Paula.

While not all of our services are running due to the current Covid-19 restrictions, we are always on the look-out for fundraising volunteers and people who would be interested in hosting a destitute asylum seeker in their home in the future.